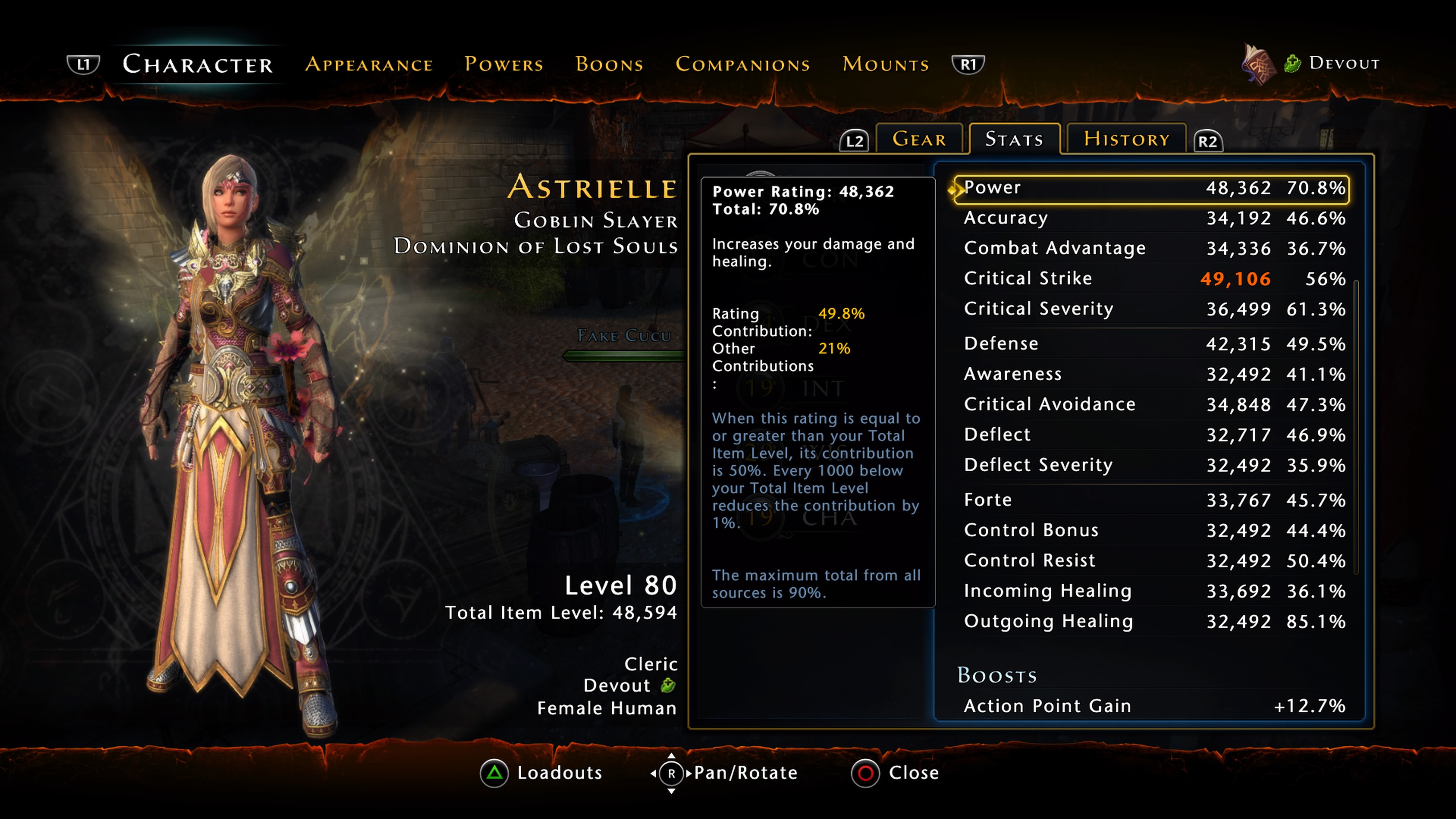 Total Item Level (TIL), which is the sum of the item level of everything you equip (from equipment, to mount and companion powers... almost everything gives you item level) is the most important thing in the game. It directly impacts your damage and your Hit Points (HP).

The Damage stat is a multiplier that is applied to both the damage you deal and healing you provide.

You start the game with 5000 TIL, so you start with 50k HP and you deal 500 Damage, from TIL, plus your bonuses from race, ability scores, and role. Your role depends on the class you play, many have a second role you can play starting at level 30.

The higher your TIL, the less an increase will be effective, and the more you'll need to benefit from an x% increase in damage or TIL.

There are 15 Main Stats that affect your performances in the game. Their effectiveness is expressed by a percentage, which can go up to 90%.

Your TIL and Ratings are the main modifiers for your percentages. But there are also many things that give bonuses directly to your percentages (race, ability scores, boons, equipment and companion equip bonuses, food, buffs...).

Your Ratings cap at your TIL, so having more Rating than your TIL will not make you stronger. On the other hand, every 1000 points below your TIL in Ratings, will decrease your percentage by 1%. Percentages are rounded on your character sheet, but not for the actual damage/healing calculation.

You start the game with 5000 TIL, but 0 in your Ratings. That means that all of your percentages are at 45% from your Ratings. And you also have a bonus in one or many stats thanks to your Race.

Most of the items in the game give a total of 15 rating points per TIL, which means that the sum of your percentages (from Ratings) will not change when you equip better gear (only your Damage and HP will). Your percentage points will only be reattributed from the stats you don't focus on, to the ones you do. But that's unfortunately not true for all of the items. There are items that give less ratings per TIL (currently collars, guild boons, many utility enchantments, the mount combat power...), and these will decrease your percentages. Usually, more TIL is good. But with these items, it's not always the case, especially in Scaled Content (read below for the details). Only percent bonuses can make your percentages better overall.

Power and Combat Advantage, as long as you surround your ennemies, are as effective. They are much more important than the other stats. Neglecting them is very detrimental, and they also yield much better results than the others. You can put all of your points in them, until they are fully capped at 90%, without looking at the other stats. Combat Advantage is the reason why you should never use abilities that push monsters when you are playing in a group, and why positionning around monsters is very important.

To understand defensive stats more easily, the values taken to compare them are expressed in effective HP (eHP), which correspond to the amount of pre-mitigated damage you can take on average before falling down.

Defense and Awareness are the stats nobody should ever neglect. While Defense gets lower and lower returns, Awareness gets better and better returns. And they cross at 45%. Past this point, Awareness becomes the most important defensive stat to focus on, especially because boss monsters always have Combat Advantage over you, and do not need to have another monster to surround you.

Critical Avoidance, while not the most important defensive stat, is still quite important to mesure your resistance to being killed in a single hit (or a succession of unlucky critical hits). Nobody should neglect this stat, but it's not as important as Defense or Awareness.

In order to heal better with your powers, investing in Power and Outgoing healing equally gives the best returns. Healers should try to cap these before looking at any other stat.

Critical Stats are almost the worst stats to focus on for dealing damage... Well, it's even worse for healing, because Critical Severity is halved for healing ! You can entirely neglect these and that won't affect your healing that much. These are the very last stats you should be concerned about. The best returns are obtained with Critical Strike equal Critical Severity.

Forte is a very weird stat. It gives its percentage to 3 of your other stats. In that regard, it transforms main ratings into percent bonuses that can help you boost your stats over 50%. But it is totally meaningless to give percentage bonuses to Forte when you can give the bonuses directly to the stats you are interested in. Except for Healers, because the main stat that is boosted by Forte for them is Divinity / Soulweave Regeneration, which cannot be boosted any other way.

The percentage of Forte is split : half of it goes to Power, Defense, or Divinity/Soulweave Regeneration, depending on your role (Damage Dealer, Tank, or Healer). A quarter of your Forte goes to an offensive stat, the last quarter goes to a defensive stat. The offensive and defensive stats boosted by Forte depend on your class.

Because of the disparity, and the fact that stats are not equal, Forte gives an advantage to Warlocks and Barbarians (due to Awareness), and Rogues and Wizards (due to Combat Advantage)... Gearing can reduce the gap, and there may be bigger disparities between classes with their powers in the first place. But the difference is noticeable.

Most of the boss monsters are immune to controls. But you are not.

Control bonus may be helpful in a Player vs Player (PVP) environment, and somewhat useful in Solo Player vs Environment (PVE) content. But that is assuming you are playing a class which has controls with a duration, and you are actually using these powers. Control Bonus is fairly useless in PVE group content, so it can be neglected entirely.

Control Resistance is also helpful in PvP, but quite useless in 99% of PVE. If controls were more frequent, it would be important for tanks and healers to have proper Control Resistance. But they are almost non existant, and that's a good thing, because it means we can neglect this stat entirely.

The main problem with the stat system is that we can't simply boost a stat, it's always at the cost of other stats. Control Stats are the stats you can neglect, to be able to boost your other stats.

You can find all of the maths I used to make the graphs shown above in this spreadsheet.

Stats to Focus on

Tanks should try to have all of their defensive ratings, and possibly Power, Combat Advantage, Forte and Incoming Healing match their TIL. Having some Accuracy would also help building aggro a bit more reliably, but it's less important than the other stats mentionned earlier.

The top priority stats to focus on to 90% are Awareness (first and foremost), then Defense (after Awareness but before every other stat), then Critical Avoidance, and Deflect Stats (starting with Deflect, then Deflect Severity, as you obtain the best returns when you cap Deflect at 90% when your Deflect Severity is at 55%). Improving Power and Combat Advantage together would also help with building aggro. And improving Incoming Healing would help your healer.

Healers should have Power, Outgoing Healing, Forte, Critical Stats, Defense, and Awareness match their TIL. Critical Avoidance and Incoming Healing would also help. All of the other stats are meaningless.

The top priority stats to focus on to 90% are Power and Outgoing Healing (together for best returns), then Forte, and Critical Stats (together), followed by Awareness and Defense.

As a Damage Dealer

Out of the 15 stats, Damage Dealers should try to have all of their offensive ratings, plus Defense, Awareness, and Forte, match their TIL. Incoming Healing and Critical Avoidance shouldn't be neglected either. But all of the other stats do not matter.

The top priority stats to focus on to 90% are Power and Combat Advantage. Once these are capped, Critical Stats (with Critical Strike = Critical Severity for the best returns) and Accuracy are the next goal. If you can still increase your percentages after capping your offensive stats, then Awareness would be the one, followed by Defense.

Many areas of the game adjust your TIL, so that you are not too weak or too strong for the content. That will adjust your Damage and HP as if your TIL was at a specific value, which depends on the content you are running. But your main ratings will not change, your percentages will remain the same.

In this kind of content, contrarily to other places, TIL means nothing at all. The only thing that matters is your percentages, and Equip Bonuses. Removing items that give less than 15 stat points per item level means you will gain percentages. For now, that is mostly collars, guild boons, utility enchantments... And mount Combat Power (its utility may, or may not balance the loss of stats)...

For this kind of content, upgrading your items is almost pointless (it only moves a few stat points from most of your stats to one or a few of them, the sum of your percentages remain unchanged, just like Damage and HP). But there are a couple of things that matter, and that is what gives you bonuses to your percentages (campaign boons, the equip power of your companions, the equip power of your items...).

In order to improve some of your percentages, like Outgoing/Incoming Healing, or Forte, which do not have many sources in the game, it's preferable to reduce your TIL to the minimum. That is stupid, but that's because they didn't take into account the new stats when they reworked the items for the new stat system... So removing every item that does not give you any real bonus is the way to go in scaled content for healers.

Scaling certainly kills a big portion of progression. It's very badly implemented and makes no sense, because the system was rushed and not thought properly in the first place. Because items were not balanced properly and new stats were not taken into account. But, at least, newer players will be a bit useful in random queues. And players who build their character properly (even though they may be half naked) will still be way more effective than newer players.

At the very least, it doesn't adjust the stats of your items randomly like it did previously, so it's a system that can be understood. And even if it's very clunky, we can manage to find builds that work.

These are simple percentages that make your character hit harder, better, faster, stronger, or gain more XP/Gold/Glory. They are not affected by scaling, and do not have any caps.

While Action Point Gain is nice for everyone, it is especially important for healers and tanks, to be able to mitigate damage when an emergency situation arises.

Recharge Speed is good for classes which have long cooldowns. Magical and Physical Damage Boosts improve the damage of your powers depending on the type of damage they deal. Unfortunately, it's not always written properly in the game.

Stamina Regeneration lets you use your Tactical power more often. It's especially important for Tanks, so that they can mitigate damage.

Movement Speed is obviously great for everyone. On the other hand, XP/Gold/Glory bonuses are not so great, though they can have niche uses.