Companions are very important to upgrade, at least the ones you use as summoned, and for your equip powers. These will give you both high item level, almost always 100% combined ratings (so your percentages stay unchanged), and percentage bonuses for your stats (equip powers). As such, they are one of the highest priority things to work on, at least for your summoned companion and equip powers. The last Bolster points make much less difference (they only give TIL, which is good for regular content, but useless in scaled content). 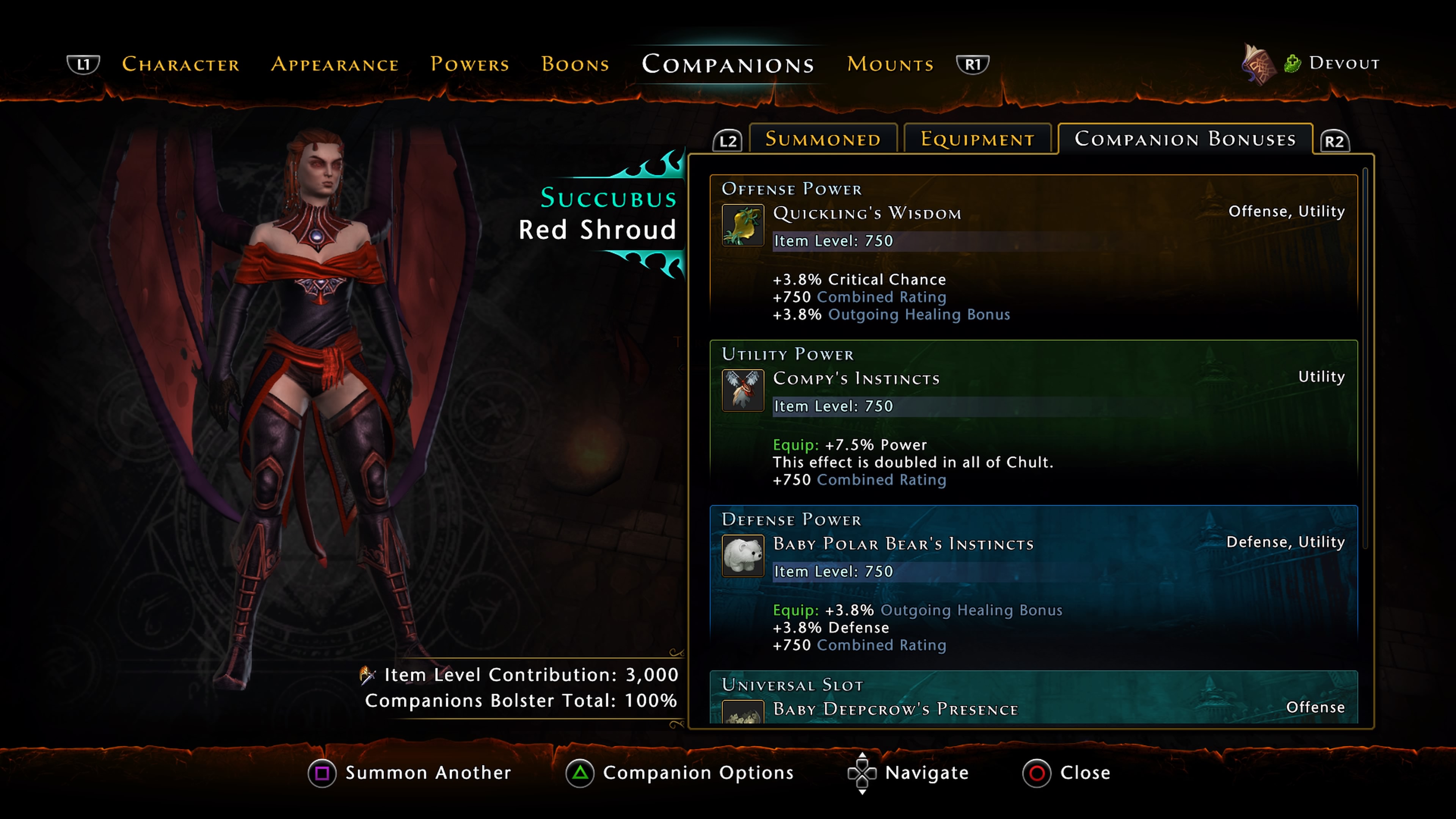 I have still some work to do to know which companions are best to summon (this will come at a later date). So, for now, I'll redirect you to Aragon, who made a very good series of videos on companions. There are many options, from augments / tanks / buffers / debuffers / single target damage dealers / aoe damage dealers / healers, and each companion has their own set of powers, and their positionning (which is important for combat advantage) also differs.

Your summoned companion gives you item level depending on its quality. This value is the only value affected by Companion Bolster :

Your summoned companion's quality also impacts the quality of your Enhancement power, which gives you even more item level (though this one is NOT affected by Companion Bolster) and an effect which procs often when you hit/heal, which is a buff to 1 stat, a debuff to 1 stat of your ennemy, or a heal that restores a portion of your and your companion's health :

So you can get up to 3750 item level from your Summoned Companion, which is nice for regular content, but how does that impact stats ?

Companions give you 85% of their own item level as combined ratings (2550 to all stats at Mythic with 100% Bolster). This means that, as you get better and better companions, your own stat percentages will decrease by up to 1.2% in every stat, and that's not really compensated by the effect of the Enhancement power when you solo... and that's just a pure loss in scaled content !

Furthermore, improving your Summoned Companion's quality will NOT improve the damage output of their powers (goodbye AD and Companion Upgrade Tokens used for the tests). Their damage output will increase a tiny bit, thanks to the item level you gain, but that's it : a Mythic companion will deal as much damage as a Common companion if we neglect the Item Level and Stats Loss.

That said, Augment Companions provide 85% of their item level as combined ratings + 15% divided into up to 3 stats. So your total stat percentages remain unchanged with them. This means that they are only good to rebalance your stats a bit and give you some item level. Almost as good as dead in scaled content.

So this is another fucked up system by Craptic, because every companion should give 100% of their stats as combined ratings and Augments should provide stat bonuses in the form of percentages on top of this to make them not totally useless.

Combat Companions are essential in solo content, to give you Combat Advantage, which means improving your damage by your Combat Advantage percentage when you surround monsters and they have blue stripes at their feet (positionning is key !). They also are generally better than Augment companions in group content.

Companions fight with your own stats. That is extremely disapointing in terms of game design (once again), because that means that whatever you are lacking, your companion will be lacking too. Need a tank ? Your companion won't be able to take damage. Need more damage ? Too bad. Want some heals ? I guess that's not that bad for a damage dealer, though Outgoing Healing will be your lowest stat, but very sad for a tank with low Power and Crit stats...

If you are a Damage Dealer, you can use a companion like the Mercenary or Xuna or whatever companion deals the most damage, to improve your damage further. You can watch Aragon's video on single target damage companions for a good benchmark.

But if you are a Tank or a Healer, it's best to have a companion that offers utility (damage mitigation or debuffs). You can watch Aragon's video on support companions to have an idea of how some of them fare.

A non augment companion is important for solo, to give you combat advantage. But there are places (FBI and MSPC last bosses, CODG, ToMM), where non augment companions can be a pain if they deal too much damage and/or target stuff that should not be hit, so it can be a good idea to have an augment, if non augment companions are still problematic (considering the amount of damage we deal now, I don't think they will be a problem anymore... but we never know...).

Enhancement powers either increase one of your stats for 15s, decrease one of your ennemy's stats for 15s, or heal a portion of your and your companion's HP over 5s (Redemption). With the exception of Reinvigorate (which triggers on healing friends), most of the Enhancement powers trigger on hitting foes. The chance to trigger the power is pretty high.

Problem is the Enhancement Power doesn't give you combined ratings, so with a Mythic power, you are effectively losing 0.75% in every stat for a gain of 7.5% in one stat when the buff procs (or a heal, or a debuff)... which is detrimental to your total stat percentages (but can be positive for your damage output or damage mitigation, depending on the stat). Debuffs are much better than buffs, because they are effective for your whole group, while buffs are personnal.

In solo content, Redemption, which heals a portion of your and your companion's HP over 5s, is great when you need it.

In group content, Armor Break, which decreases ennemies' Defense, is the best ! Dulled Senses, which decreases enemies' Awareness (yes, below 0%) is another option if you do not have Armor Break (there are cases Dulled Senses can perform better than Armor Break, especially if your Combat Advantage is low or you are fighting opponents with high Awareness in PVP, but it's a lot less practical than Armor Break). Vulnerability is okay, to reduce enemies' Critical Avoidance (below 0% too), if most people in the group have a high Critical Strike.

If you are a (pretty rich) Healer, you can otherwise boost your own Outgoing Healing with Reinvigorate (it comes from the Golden Bulette Pup). Or for far cheaper, your Power (and that's better to improve Power if your Outgoing Healing is higher than your Power in the first place), with Potency.

If you are a Tank, you can use Honed Instincts to boost your Awareness, or Fortification to boost your Defense. Another option, to help the group too, is Weapon Break, to reduce ennemies' Critical Severity.

Companion Bonuses are pretty much the only positive things in the game with items Equip Bonuses and Sets. They give as much Combined Ratings as Item Level (which means your total percentages from stats remain unchanged) and they give percentage bonuses on top of that !

The Item Level and efficiency of your powers depend only on the quality of your companion with said power (contrarily to the Enhancement Power which only depends on your summoned companion). It is not affected by bolster, and most of the powers give a certain amount of stat percentages (some have different effects, like improving damage to a certain type of monster by up to 11% or dealing direct damage in certain conditions) :

Here are some of the "Best Equip Powers". Other options may or may not be good or better depending on your build and what your are fighting against.

I had high expectations for the following powers, but it seems the damage is calculated based on your Damage stat and definitely not the regular damage formula. So neither your stats nor damage bonuses affect these (so when it's written 150 magnitude, it will effectively deal 1.5 times your Damage stat, the damage will be reduced by your target's Defense, and can be deflected, but it won't benefit from your Power nor outgoing damage bonuses, it won't crit, nor benefit from combat advantage...)... which means they are very underwhelming and very misleading... Craptic™ hit again...

The best way to upgrade your companions is to use Companion Upgrade Tokens. You can get them for free in dungeons, Juma Bags, and some events. You can buy them for 3 Tarmalune Trade Bars each (2 during a sale, these are obtained by opening lockboxes). You can also wait for a sale in the ZEN market (you can also get 25% coupons from time to time by invoking your god), and buy Companion Upgrade Packs (that’s 75 tokens for 375k AD when there’s no sale, assuming you can exchange AD to Zen).

So this is a totally stupid system in which tokens are valued between 1667 and 10k AD each, depending on the quality of the companion you are upgrading. If the devs used a bit of logic and wanted people to use AD more often, the AD price would always be 5k AD per token. Even then it would be more interesting to buy tokens from the Zen Market using coupons or during sales... But it would be much less of a scam to use AD to upgrade a companion to the highest qualities...

Companion Equipment is just another kind of equipment that only serves the purpose of giving you item level (great in regular content, useless in scaled content) and rebalancing your stats towards those that are the most useful to you.

Their main feature is the (Indomitable) Runestones you can slot in them. So you pretty much need double offense companion gear (which are all of epic quality, as far as I know) if you want to benefit fully from them.

Considering the fact that there are only 5 out of the 12 epic companion gear from bounties in Sharandar that have double offense slots, and that the chance to get an epic one is about 1 on 40. I takes an average of 288 bounties (144 days on a single character) to get 3 of the double offense companion gear. On the other hand, it takes 12 days to complete the Stardock questline in Undermountain to get a guaranteed double offense companion gear with the stat of your choice... The only drawback with the stardock questline is that you can only complete it once per character (but the companion gear is bound to account and can be shared with your other characters). Pretty sure the drop rate is much better in Stardock expeditions in the first place.

In Offense slots only :

In Defense slots only :

Indomitable Runestones are just the best. Serene are pretty much useless since your companion is usually quite tanky in the first place, and will revive automatically in a few seconds after dying anyway. Other Runestones are quite mediocre, just like stat enchantments.

Bonding Runestones are now outdated and can be exchanged for (tons of) AD at the exchange vendor in Protector's Enclave.