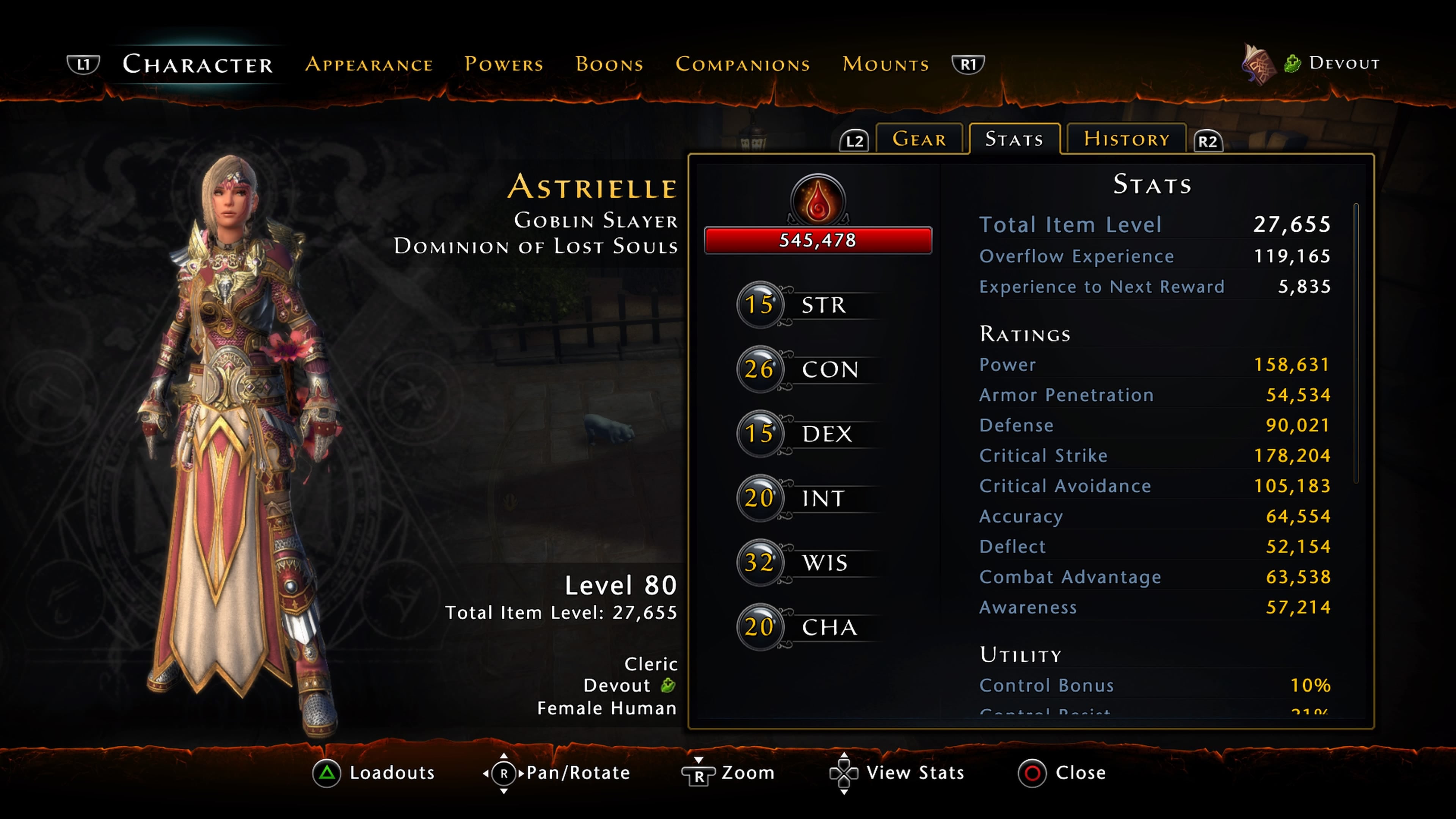 Players, companions, and monsters, have stats. Primary stats (or ratings), work as a couple of offensive vs defensive stat.

Most of the items give combined ratings. These actually boost all of your primary stats, except Power and HP.

Secondary stats, like Movement Speed, Critical Severity, Outgoing Healing, Incoming Healing, etc., have no caps. But the ways to get them are limited.

How many stat points ?

And so, the caps are, for most stats / critical avoidance / combat advantage :

Note that Paladins and Clerics need up to 10k more points in Critical Avoidance to be capped all the time, because they have a general feature that improves their Critical Avoidance by 10k, but this bonus disapears as their divinity goes down.

Also note that Clerics need up to 10k more points in Accuracy to be capped all the time, as they have a general feature that improves their Accuracy by 10k, but this bonus disapears as their Stamina goes down. In reality, 3-5k are enough, because you will rarely totally deplete your stamina, and it replenishes pretty fast.

Critical Strike has a different formula for healing. It is not countered by Critical Avoidance. The formula is :

It sill caps at 50%, so there is no reason to have more points than 1.25 x Power. But it also means that gaining more Power above 0.8 x Critical Strike will yield lower returns (it still improves your average healing, but less than before), because it reduces your critical chances. But it does improve your minimum heal, and that makes your healing more reliable, especially for Heal over Time skills which will fully crit or never crit for the whole duration.

Which stats to focus on ?

A Tank basically needs all of their stats capped, with the exception of Awareness. The most important ones are Defense and Armor Penetration. Then, Deflect and Critical Avoidance make a big difference, just like HP. Accuracy is important to make sure your skills are not deflected (which would result in less aggro building). Incoming Healing is primordial to make sure your healer can keep you alive. Then Critical Strike can significantly improve your damage. Eventually, Combat Advantage is usually better than Power (because you're supposed to give Combat Advantage to everyone in the group), so it's good to focus on it if you have stat points left and above 100k Power. If you position properly, you shouldn't need Awareness at all, but it's not bad to have some in the earlier dungeons to learn the ropes.

As a Damage Dealer :