Boons are bonuses which you can pick in different trees as you progress into campaigns, join a guild, or unlock PVP achievements. Every character has access to the same boons, contrarily to feats which depend on the class. There are 3 types of boons : 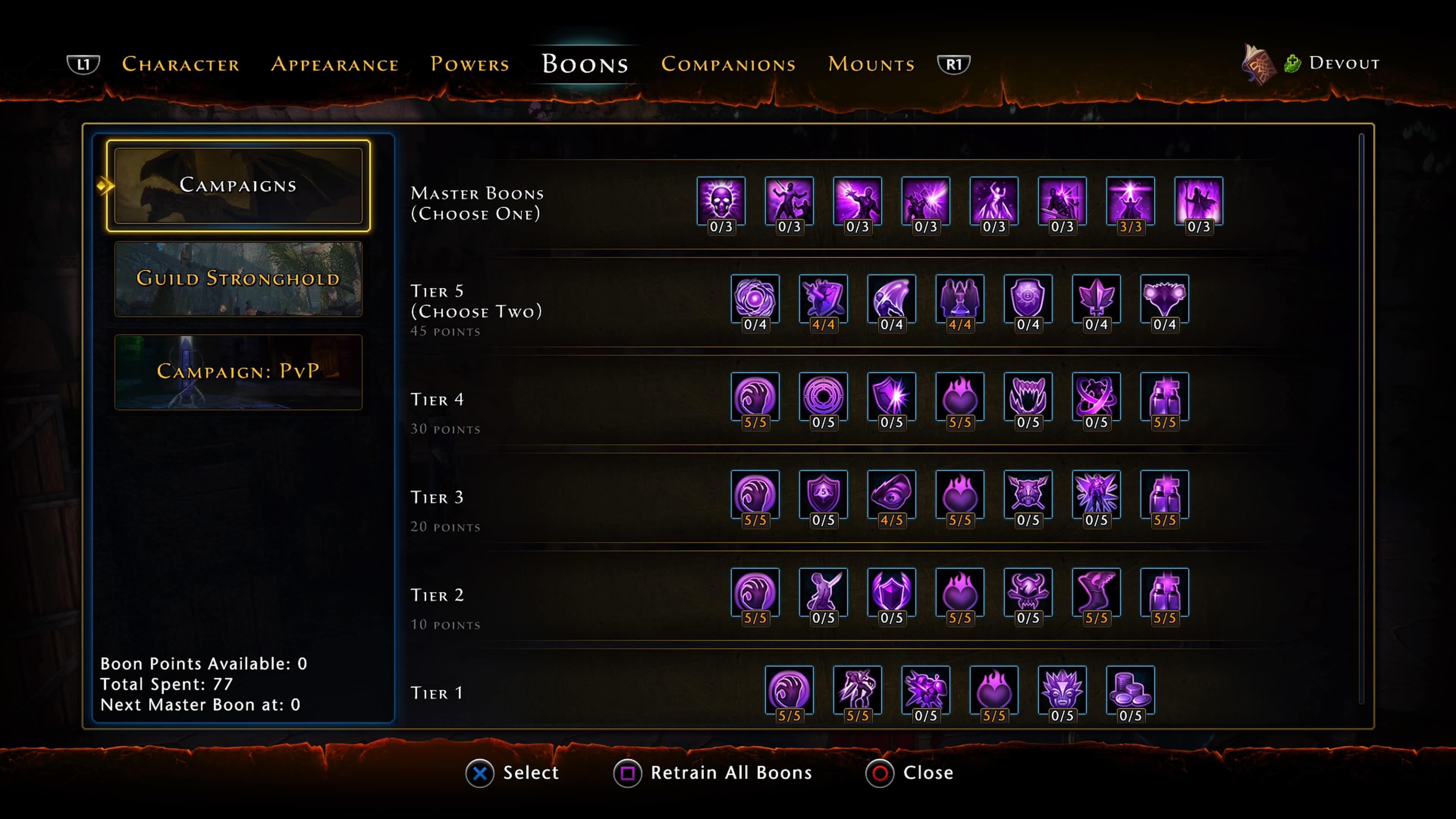 As you complete campaigns, you will get access to boons (usually 4 to 8 points per campaign, to a current maximum of 73 points + 4 with the 1st episode of Sharandar).

With the mod 20 stats rework, stat boons are now very underwhelming (you can get a maximum of 4% Power or HP, or 1% in any offensive or defensive stat or Control Resistance, 0.2% per boon point each). But they are straight bonuses and won't make you weaker in scaled content. Power and HP are certainly very valuable for everyone, just like Defense and Awareness. Then, it's all about balancing your stats.

The Tier 2 boon Marathon Runner (up to 12.5% movement speed) is a must have for everyone, as it will make questing a bit faster and will also help you evade aoes.

There are 4 boons that increase damage and damage resistance, up to 5%, against Cultists, Fiends, Dinosaurs, and Undeads, respectively. All of these are nice but very situationnal. There are certainly many Fiends and a few Undeads in end game dungeons, but not in very end game content. So I don't think it's a good idea to pick those, unless you can afford a loadout for a specific type of monsters, or you have spare retrain tokens to use.

There are 3 boons that increase healing potions efficiency (by up to 15%). On top of the efficiency boost, at max rank they also add a chance to give you a Heal over Time effect, increase your maximum HP, or increase your maximum Power, respectively, for the next 30s. Considering the fact potions were buffed quite a lot, and there are 2 Guild Boons that make them even more potent (either by boosting their efficiency even more, or healing your whole party) these can actually be quite interesting, though they are also situationnal.

There's also a Gold Gain boon, but considering the value of gold, it's totally useless (you can easily make tons of gold with crafting).

You can only pick 2 of those boons, once you have spent at least 45 points in other boons and they all give 1% per rank :

Tanks should pick Welcome Blessing and either Masterclass (Barbarians have a great Forte stats, the others not so much but it's still 2% Defense + 1% in 2 other stats at max rank) or Quick Turnaround (if you rely mostly on your cooldowns).

Damage Dealers should pick Masterclass and either Quick Turnaround (if you rely mostly on your cooldowns) or Call of Power.

You can only pick 1 of these boons, and you can only put points in this one after you've spent 10, 30, and 60 boon points. Effects are unlocked and upgraded as you increase the rank of your master boon.

Tanks should pick Focused Retaliation. Enhanced Application would have been nice for ToMM if the requirement was not to have less than 30% HP...

Healers should pick Blessed Advantage, as Tanks are supposed to have capped Defense and shouldn't rely on you to get their Stamina back (that's what the Elven Battle enchantment is for).

Damage Dealers should pick Blood Lust, as Focused Retaliation no longer returns damage back to your attacker. Deathly Rage is an option for solo, but it won't help against boss monsters with no adds, and stats can be capped without this boon when you reach very end game.

Being in a level 20 guild is a huge advantage : not only that means people to play with and help you, but you will also have access to 3 Guild Boons at their maximum power. Together, these will give you up to 3000 Item Level (which is a very good boost in Damage and HP early on, and also helpful to unlock access to dungeons and campaigns later on). Guilds can also offer 1 PVP boon (which doesn't improve item level). You can select a single boon in each category (Offense, Defense, Utility, and PVP) and change it at will with no need for a retrain token. As a guild can only have 4 out of the 9 buildings for boons (which are the Barracks, the Explorers' Guild, the Mercenary Outpost, the Stable, the Training Yard, the Wizard's Workshop, the Temple, and the PVP buildings : Siege Workshop and Siege Smithy), you will not have access to all of the boons. Choose your guild wisely !

In Offense, there are 2 types of boons, Stat boons and Overload enchantment boons :

Where they matter (against Giants, Trolls, Dragons, Demons, Elementals, Feys, Lycanthropes, Orcs, Thayans, and Undeads), Overload enchantments make a pretty big difference and the Enhance Overload : Slayer boon would be best in slot for Damage Dealers, while the Enhance Overload : Ward boon would be best in slot for Healers and Tanks. These are pretty situationnal, and it's not always easy to understand on which monsters they are useful or not.

Stat Boons are good when you cannot benefit from an Overload enchantment, and you'll pick preferably Power, then Critical Strike or Critical Severity (lowest of the two), then Accuracy, depending on which stats you have not capped yet.

In Defense, there are only Stat boons :

Utility Boons are pretty useful but quite situationnal. Problem is none of them increase your stats while they all give less combined ratings than item level. As such they are detrimental to your stats. Unfortunately, there is no way to unequip them when you don't need them... unless you use a retrain token (Craptic™).

The Mount Speed Bonus is the obvious choice to make life better. But there are many places where you cannot use your mount (most of the dungeons). The Experience Points Bonus is good to level up a character, but also good at level 80 to benefit from overflow experience rewards (some RAD and refinement points when you accumulate 125k experience points, with diminishing returns when that happens multiple times in the same day).

If you have explorer's charts (which you can buy at your Stronghold with Guild Marks), always collect the materials with the Treasure Hunter boon and during a Double Profession event to get 4 times the expensive materials !

The Revive Sickness boon is a must have for high end trials, where losing too many Hit Points because of the revive sickness means you'll get killed over and over until you can't revive.

The Group Heal Potion Bonus is pretty good now as the very best potions (Potions of Radiant Healing +1, alchemy lvl 80 craft) were buffed to heal 264k HP (303k HP with the healing potions campaign boons), instead of 74k previously. That is up to 190k HP (should be 228k) for your group members when you use a potion, especially good in scaled content (they already broke healers with mod 19 anyway... do you still need a healer when everyone in the group can receive more than 1m HP every 20s from potions ? At least that makes an additionnal healing mechanic for healers, way better than the clunky stuff we got for mod 19...). The Healing Potion Bonus pretty much changes your regular potions into Stones of Health (Potions of Radiant Healing +1 will heal you for 390k HP, and even more with the campaign boons).

Here are the PVP Guild Boons :

These boons only impact the PVP overload enchantments (Marks of Stamina Drain, and Wards) which you can buy from the Gemmonger at your Stronghold. Not many guilds have these.

Every guild should have the Wizard's Workshop for the HP boon (also gives the PvE Ward boon and the Healing Potion boon, which are both nice to have).

The Stable is awesome for solo content, as it gives the Mount Speed Bonus boon (also gives the Critical Strike Boon and the Defense boon, which are nice though there are better alternatives).

High End players should find a guild with the Temple for the Revive Sickness boon (also gives the Awareness boon and the Group Heal Potion boon, which can be used in specific situations).

Artisans going for Masterwork should find a guild with the Explorers' Guild for the Treasure Hunter boon (also gives the Accuracy boon and the Control Resist boon, but these are useless).

The Training Yard is great for its Enhance Overload : Slayer boon (though it's very situationnal, it's very potent). It's also good for those who do PvP (for its Glory boon), also gives access to the Deflect boon (but it's useless).

The Siege Workshop or Siege Smithy are also good to have if you are into PvP.

Alternatively, the Barracks are nice for their Power boon (also give the Incoming Healing boon and the Experience Points boon), which are nice overall but much less important than they were in the past.

The Mercenary Outpost is pretty much useless.

You can have up to 6 boons from the PVP Campaign, by scoring a total of 1500 kills or assists, capturing 300 flags, and winning 100 games. These boons will only be effective in PVP though.

In terms of damage mitigation, Hit Points are generally the clear winner until you have extremely high HP. But there are two things to consider : Critical Avoidance is a lot more effective in PVP than in PVE, because the best Damage Dealers have high Critical Strike (against 50% for monsters); and the gains from boons are diminishing with ranks.

If you rely on your cooldowns to be effective, then Recharge Speed is definitely the best choice. But again, the first point gives more than the second point in the same boon, so it can be interesting to improve 2 boons. Control Resist is definitely a good idea if your opponents use controls. AP Gain and Stamina Gain may be the least efficient ones, but they are still valid choices depending on your class and playstyle.

You can only put a single point in Tier 3 :

This one depends mostly on your playstyle. Role Reversal is very potent for Tanks and Damage Dealers. Adrenaline Rush is great either for fleeing or reaching your opponent's faster if you are a melee class. Deep Wound is great against Healers and players with high self healing capabilities.